In a series of articles comparing different universities to each other based on standard ground rules, we return again to pit Siksha O Anusandhan and KIIT against each other. You can check-out the previous comparison articles through the links below:

LPU vs Amity vs CU vs Chitkara

VIT vs SRM vs Manipal

Christ University vs IFIM vs AIM

In this article, we will be turning our focus to the state of Orissa, specifically two top universities in the Orissa, Siksha O Anusandhan and KIIT. 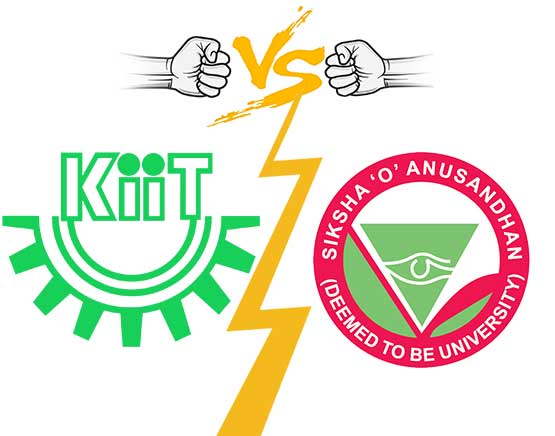 SOA and KIIT rank amongst the Top 100 Universities in India

Both are located in Bhubaneswar, and are by far the best universities in the state barring the likes of IIT and IIITs. From Orissa, a state with a number of educational institutions, only these two made the cut in India’s Top 100 Universities Ranking released by NIRF.

SOA University was ranked 33, while KIIT was at 79. However, the difference in the evaluation score calculated by NIRF was almost negligible.

Before we delve into gathering data for both of these institutions, it is important to understand the factors we’ll be using to assess these two universities. The same factors were used to compare colleges and universities in previous articles.

They are given as such below:

For any private institution, placing a solid campus recruitment program has become an essential task. Most aspirants, engineering students in particular pay the high fees at private colleges and universities assuming the university will be able to organize a solid placement season at the end of four years.

If this incentive wasn’t otherwise ostensible, most students would not choose engineering in the first place. Since most college aspirants in India belong to the ‘aspirational’ middle class of India, most aspirants tend to gravitate towards fields with the highest ROI.

Though objectively placements are the most important factor, the choice of selecting a college or university ends up becoming a highly subjective exercise in most cases. The student perception of a given college/university is shaped by a number of factors.

It wouldn’t be an over-stretch to say that student perception is a sum total of many factors relating to a college. To put it in a nutshell, a college which projects a healthy image tends to have a solid student perception. There is a reason why the IITs are so popular. Keeping aside the obvious factors such as placements and academics, IIT in itself is a highly rated institution primarily because of the over-blown hysteria which surrounds its admissions. Most people believe that since it is a difficult to get into IIT, it must consequently be a great institution by default.

While this line of thinking is faulty, perception is a factor shaped by the inconsistencies of human thinking in general. Like it or not, college perception plays a key part in the ranking of a college or university.

Have you ever wondered the reason behind why college education is necessary after school? The system could as easily have been designed to allow the schools to teach students for three or four more years after 10+2. Why the need for college?

The answer is simple. Infrastructrure.

Imagine sitting in a small classroom crammed with 80 students. You’re sitting at the end of the classroom, unable to listen to what the teacher is teaching.

Is this how you want your college education to be?

I suppose not. Student to faculty ratio is often an argued concept amongst educationists. Some tend to argue that its impact is slightly overstated, while others argue it is a key parameter to evaluate an institution’s focus on academics.

When we talk about private colleges and universities, the discussion inadvertently turns, at some point or another, to the fee of the course offered.

However, the lack of seats in government colleges means most students end up studying at private colleges and universities. In such a scenario, most students consider colleges which are more affordable in comparison to another. This is merely a ‘risk-reduction’ strategy, which is understandable on the students’ part.

SOA Bhubaneswar is a top ranked private university, under which operates the Institute of Technical Education and Research (ITER).

ITER is essentially the technical department of SOA providing courses such as B.Tech, M.Tech, MCA and M.Sc.

SOA was established back in 1996 when there was a dearth of quality educational institutions in the state and Eastern India in general. It has since built a reputation for providing sound higher education to students from Orissa and other parts of the country.

The university operates as the convener of nine degree granting schools and colleges. Most of these schools and colleges are accredited by top education bodies. Some of the fields in which SOA academics is invested in includes engineering medicine, pharmacy, business, nursing, biotechnology, science, humanities, environment, nano technology, materials science, agriculture and law.

SOA is recognized by UGC, and further graded ‘A’ by NAAC. It was recently ranked 20th amongst other universities in India by NIRF, making it the highest ranked college from Orissa.

As stated before, SOA University has its academic wing organized through nine schools and a college. These respective wings of SOA are listed below:

All these schools and college have power to grant degrees. They set their curriculum and academic structure as per the guidelines set by SOA.

SOA offers over 22 courses, divided amongst its various constituent institutions. The details of SOA courses, namely the duration and fee is in the table below.

SOA placements are generally decent, but their reliance on IT company recruitment is no secret. Some details regarding placements at SOA are given below:

KIIT remains the most popular institute from Orissa. It was established as a skill-development based Industrial Training Institute in 1992. The brainchild of educationist and Member of Parliament Achyuta Sumanta, KIIT has emerged from its humble backgrounds when it accommodated just 12 students and two faculties to managing an institute comprising of over 20k students taught by more than 1400 faculties.

Officially, KIIT dropped the ‘university’ tag last year upon the orders of the SC. The order directed all ‘deemed-to-be-university’ tag holding institutions to drop ‘university’ from the end of their names for all official purposes. Thus KIIT is no longer a university, so to say.

KIIT is amongst the best universities in India for B.Tech

Even SOA dropped the ‘university’ tag from its name. The order isn’t an indictment on the quality of education at the institution, but rather a bureaucratic anomaly which needed to be fixed. Some other popular universities such as JIIT and even SRM were forced to drop the ‘university tag’.

KIIT is accredited by many educational bodies such as SCI, INC, MCI, BCI, AICTE, UGC and NBA. It is also graded ‘A’ by NAAC.

Like most other colleges and universities in India, courses are offered at KIIT through different departments termed as ‘schools’. The list of these schools is given below:

KIIT courses total down to 100 programs offered across the 19 schools of learning under its wing. The course details, namely the course duration and fee are listed in the table below:

Over the years, KIIT has constantly strived to establish cogent campus recruitment programs to offer outgoing KIIT graduates the best possible start to their respective careers.

Having roots in education since 1992, KIIT organizes a top draw campus placement program every recruitment season. The overall performance of KIIT in campus placements is a key reason why students look to join the institute in the first place. Some key placement statistics are listed in the table below:

Having discussed both SOA and KIIT in detail, we move onto the last bit of our comparative exercise, the comparison itself.

We discussed earlier the importance of placements while choosing a college or university. The analysis done earlier clearly places KIIT over SOA in terms of the proportion of students placed and the median package.

The reason behind could be highly subjective. By considering pure analytical factors, one could speculate that since KIIT has a better alumni network than SOA, it tends to have an upper hand in placements. However, there could be many more factors which could have influenced this disparity.

As we mentioned earlier, student perception is a highly subjective factor. Claiming one college is perceived very well compared to another is a dangerous assumption.

We can draw a verdict on student perception by comparing the rank of SOA and KIIT in the NIRF rankings. Since SOA is ranked higher than KIIT, one can assume that the subsequent perception of SOA will be relatively better compared to KIIT. Thus, this one goes to SOA.

1:1 between KIIT and SOA

Both KIIT and SOA have impeccable infrastructural facilities, so choosing one over another would be unfair. This section remains tied between both.

2:2 between KIIT and SOA

SOA has a much better student to faculty ratio, as every teacher propionates to seven students. At KIIT, the ratio is highly skewed towards students, which is not an ideal case scenario.

The previously stated numbers clearly suggest SOA is much more affordable in comparison to KIIT. So SOA edges out SOA here as well.

On pure quantifiable terms, SOA is a better choice than KIIT, beating the latter with a score of 4:2