Topic We Cover: EC vs EE 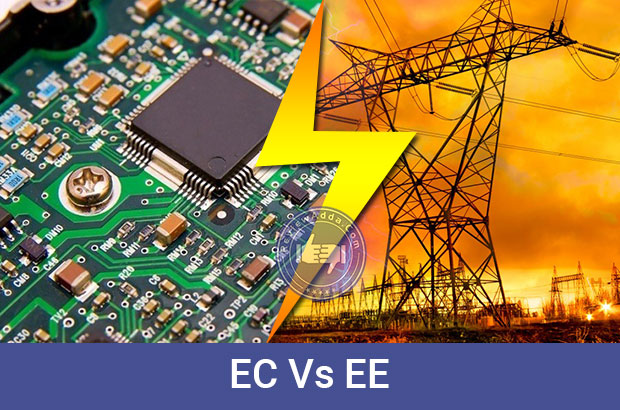 This question has long needed addressing. Every student passionate about electrodynamics after 10+2 is seen pondering over EC or EE. Their similar name does little to help, but wayward and sometimes downright incorrect advice sends students down the wrong path.

To be fair, both branches can be classed as one of the most difficult engineering streams. Great variety and ominous depth in each of the streams make them a tough cookie to crack. Placements are usually similar. Like CS and IT, EC and EE attract a similar tribe of companies.

Even IT companies have started considering EC and EE engineers for positions. This clearly establishes the wide horizon of companies EC and EE graduates can attract. Not only core jobs in the electrical and electronics sectors, but IT and algorithm based positions are being filled these days by EE and EC graduates.

This trend does not seem to be abating for the time being. With the prospect of attracting more than two core fields by taking one stream, EC and EE are slowly closing the gap between CS and IT. Due to lack of industry knowledge amongst CS engineers at the present moment, many tech companies are turning to EC and EE engineers.

Though they have to be trained at first, the general belief in the industry trusts EC and EE engineers to be versatile and aware enough to take more than two or three fields into their stride.

But amongst the two, which comes out better? Does EE outperform EC or is it the other way round?

Unlike CS and IT, EC and EE do not have a fundamental difference. The only difference is the level at which electrodynamics is being considered.

EC is looking at current at a microscopic level. This means looking at the flow of current through different materials and circuits and designing of certain devices based upon the flow. Subjects such as VLSI design, Embedded Systems, Solid state physics, Communication Systems and Microprocessors are exclusive for EC. This means EC is technically a core electronics branch. Large-scale transmission and power losses are not under the purview of EC course structure.

EE is conversely dealing with the current on a macroscopic level. The study of electrical devices and their consumption of power based upon the type of current flowing are dealt in EE. Subjects covered in this course include Single and Polyphase current, DC motors, Transformers, Induction motors, Synchronous motors and Power systems fall under EE’s umbrella.

There are other branches such as Instrumentation and Control engineering dealing with other aspects of this field. While they are different in their own right, EC and EE are simply broader and more versatile.

The mistake many students make during admission is choosing these streams without any research or foresight. This can be very dangerous. In fields as engrossing and involved as EC and EE, students cannot afford to take half measures. Since this is a relatively new field for students compared to mechanical or civil which are introduced to some extent in schools, being half-hearted in college studies can have devastating consequences.

Choose EE or EC only if you’re 100% ready to face the music from day one. None of the two streams is a cakewalk by any means.

Coming two comparisons between the two-course structures, it is clear that EC is a more theoretical course in relation to EE. Due to its intricate nature, many colleges in India simply cannot afford to install real-time instruments in EC labs. On the other hand, EE involves more lab work. Dealing with big machines used for power is transmission is merely one of the many lab credits students can get in this field. 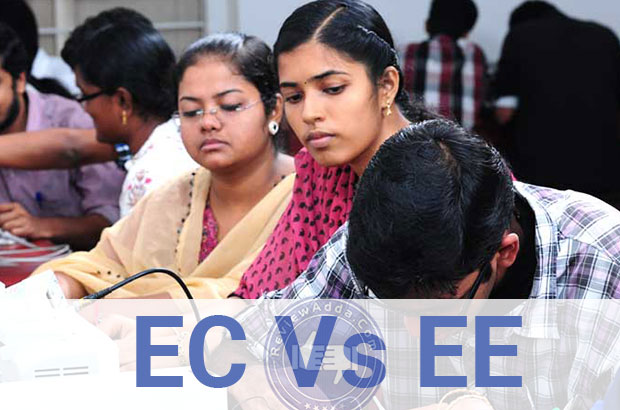 EE is a branch of exclusivity with only top colleges offering the course. EC, however, is common across India

While many industries accept both EC and EE engineers, there are a few areas where both streams diverge into mutual exclusivity. Here is a comparison between EE and EC core industries

In the modern era, practically with a remote or display has the work of an EC engineer written all over it. Due to the meticulous nature of this industry, EC engineers are practically always in demand. With new kinds of phones, laptops, computers peripherals and accessories being launched and manufactured by the passing minute, times have never been kinder for EC graduates.

EE engineers prompt a different kind of core industry. Due to a lack of electrical power penetration in India, the scope and current climate for EE engineers is very exciting. Companies handling electricity boards tasked with installation, maintenance and operation of power grids in cities and towns recruit EE engineers.

These companies include TATA Power, NTPC, Reliance Power, Essar Energy, Welspun Energy etc. However, government-funded organizations usually do not consider EE graduates. DRDO, JTO, and ISRO have separate exams for each stream. EE doesn’t make the cut in the exams itself, so applicants have to register for the EC paper.

Besides energy companies, many appliance based companies like LG, Onida, Bajaj, and others hire EE engineers. In comparison with EC, EE engineers have an easier path to placement due to a general lack of qualified professionals in this sector. Besides, with the growing demand for lossless of power transmission in the country, EE is a very safe stream in terms of placements.

As mentioned above, there is plenty of scope for both EE and EC engineers to exist in a dynamic jobs market. 15 years ago, the case would have been different.

Before the IT revolution, EC engineers were not in demand in the country. Mobile phones were scarcely seen and people were generally unaware of the true power of computers. Chip design and semiconductor experts were not gathering enough industrial acknowledgment in a stagnant electronics sector.

The advent of IT and growth of India changed everything.

In the last 20 years, India has put a mobile phone into the hand of every person, people have tried and tested computers and moved on to laptops, smartphones have become a necessity and innovation has been rewarded across all forums. India has moved far and fast.

This revolution has been made possible by the constant application and skill of EC engineers. From broadcasting radio signals to designing rocket equipment for ISRO, EC engineers have spread their wings and made their presence felt everywhere.

At the same time, the potential for EE engineers has always been there but there hasn’t been a burst of brilliance on the fore. Power utility still remains an issue. In an area with the power outage, one can still make a phone call. So which sector has done better?

This is not to say that EE engineers don’t get placed. In fact, placements have been climbing every year, but the dearth of true application is apparent.

This also has something to do with the IT sector.

Due to the meteoric growth of IT companies, cities such as Bangalore and Hyderabad have become massive software hubs in India. Companies such as Infosys, Wipro, TCS, HCL etc changed the landscape of India’s jobs market by mass recruitment drives. In the scramble to join the hype surrounding these companies, many EE engineers choose IT over core companies.

EC engineers joined in on the bubble too, but massive growth in their own core sector meant not many deflected to the IT sector. This has caused vacancies in EE core sectors where many students are still needed.

This has left the two core sectors lop-sided. While EC’s core sector has gone on to reach great heights, EE has struggled.

In terms of remuneration, it is difficult to compare two branches.

Many factors come into play while recruitment. An EC or EE engineer from IIT or another top engineering college will command a very high salary which would e disproportionate to the industry standard. Nevertheless, the average salaries for both branches are tabulated below

While not many variations are apparent in the IT sector, the key distinctions lie in the core sector of both fields. EC races ahead in the core sector due to the dynamic nature of modern accessories and electronic appliances these days.

EE, however, lags due to the sheer number of engineers needed in the sector. While EC doesn’t need massive recruitment drives to fill up numbers, EE needs the massive workforce in power supply companies such as NTPC, BHEL etc.

Picking a winner here is difficult. While current numbers put EC ahead, the sheer level of opportunity in EE makes it an exciting prospect as well.

The growth of job in IT sector is purely circumstantial and performance-based. Coming to core jobs, EC jobs have a high yet tangible ceiling as the sector has already seen massive growth. This means although the sector is still poised to grow much more, there is bound to be a fatigue point somewhere in the future.

EE’s core sector is an entirely different case though. Due to government oversight over power transmission, the field stagnates over time. However, with privatization of power imminent, the scene could change drastically over the next few years. With a lot of potentials and still a long way to go, EE could be one of the most coveted streams of engineering in India in a few years’ time.

EC v EE- Which is better?

EC has shown over the years’ its propensity to defy trends and innovate every year to create further openings and areas of potential. From television companies to telecom industries and further on towards higher applications like satellite monitoring, EC engineers are needed everywhere.

EE, on the other hand, has been the victim of IT headhunting. Similar trends have befallen mechanical and civil core industries as well, but the difference is the huge potential EE still has as a core sector. Consumer appliances have always been evolving, power utility presents a massive opportunity and hardware companies abroad are slowly turning to India as a manufacturing hub.

Looking at both fields at the moment, the potential seems endless and the ceiling is very high. If a choice had to be made, EC is the safer bet due to a better track record over the past few years.