Myth About CS vs IT Course

Topic We Cover: Myth About CS vs IT Course

It was always coming down to this.The days of mechanical, civil and electrical being the only reliable streams of engineering are finally over. The Silicon Valley boom gazumped engineers in the West during the early 1970s. IBM had started rolling out mainframe computers for big and small companies. The establishment there gave little importance to modules like user interface and accessibility. The rise of Apple and later Microsoft compressed IBM out of the market and heralded the era of application based computing.Also view GATE Registration details for 2019. 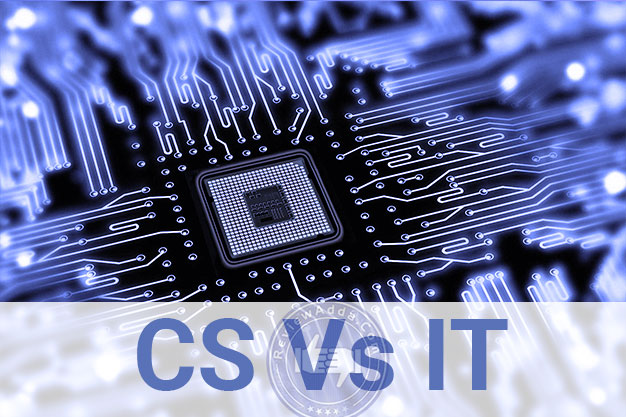 CS vs IT. The dilemma students face every year as they hope to make the right choice.

History of CS and IT courses

These events created a massive demand for CS engineers and technicians proficient in writing code. To meet this demand, top universities in the US changed their engineering curriculum drastically to suit industry needs.

This evolution took time to reach Indian shores. Until the late 90s, mechanical and civil were still the preferred choice amongst students. As Indians started integrating computers into their daily lives and foreign companies started turning to young Indian talent for IT services, the evolution of engineering colleges in India began.

Computer Science (CS) and Information Technology (IT) are the pillars on which the modern technological revolution has spread its wings. Engineering aspirants flock to CS and IT branches as soon as results and ranks are declared. Every digital appliance today has functionalities associated within the purview and guidance of CS and IT engineers.

The world biggest corporation and the richest person in the world, both remain closely knitted to the CS and IT industry. This clearly highlights the impact these companies have had over the recent years. From oil drilling companies and automobile and weapon manufacturing, the tech business has now outpaced them all and emerged as the pathway to future innovations.

So what is the difference really? CS and IT are often clubbed together as two fields with overlapping sections. The IITs have further highlighted this point by not having any course for IT as they deem CS broad enough for an aspiring tech engineer.Which is better, CS or IT?

Difference between CS and IT course structures

Despite what is usually said, CS and IT have some fundamental differences.

Team A is tasked with mechanically assembling the parts required for building the rocket. From buying the material required to build the rocket to shaping it properly and finally assembling it. This team can essentially be called computer engineers. They have knowledge about building systems from the ground up, but are not concerned about the inner functionality or running of the system

Team B is tasked with implementing systems which are required for running of the rocket. These tasks include designing fuel valves, installing visual systems for astronauts to use, creating monitoring systems to gauge trajectory and fuel consumption. Team B can be called as CS engineers. They have acute understanding of the fundamentals of computer languages and the algorithms used behind developing code.

Team C can essentially be called the astronauts. They use the systems created and monitored by Team A and B to ensure successful flight of the rocket. As you may have guessed, Team C is an analogue for IT engineers. They use systems and languages developed by computer engineers and computer scientists to match the requirement of the user.

As mentioned above, the fundamental differences in the structure of CS and IT warrants a general differentiating line between the two departments. Some portfolios grabbed by both CS and IT engineers are

The question is an intriguing one. CS is essentially proposing a scientific approach to computers. Every aspect of modern day computing is rationalized and explained to CS students. The choice 15 years ago would have been a no brainer. Because of a dearth of engineers in the computers industry at that time, CS engineers were much more preferable over their IT counterparts due to their versatility.

In the current climate, IT engineers have created a strong place for themselves in the industry. With so many CS graduates in the current jobs market, companies are more interested in specificity and niche skills. While CS is still a highly valued field, IT is no longer a less attractive option.

The main difference cited in CS and IT was the bare fundamentals. However, recruiters these days are less interested in course structure at universities due to plummeting standards of graduating CS and IT engineers in the country. The emphasis now is more on ability to handle specific tasks such as data mining, internet security, computer and network architecture etc.

A good IT engineer is much more valuable than an average CS engineer. If an engineer possesses an appropriate skill set, he/she is never going to struggle looking for a job.

In terms of making a choice, industry forces have made the choice very simple. Aspirants can choose whichever branch appeals the most to them without worrying about job prospects. The dynamic landscape of the tech industry will always throw up enough jobs for decent CS and IT engineers.

For many students, it all comes down to this. Money speaks, and often loudly. After four gruelling years of engineering, nothing lights a CS or IT engineer’s face better than a bumper salary package.

Average salaries across both fields are very similar. Due to the general overpopulation of CS and IT engineers in the country, packages have fallen down drastically over the past few years. A tabular comparison has been done below.

Please note these packages are an average total of CS and IT engineers from all colleges. Engineers from IIT and top NITs are offered much higher packages.

As expected, there isn’t a great difference in packages for CS and IT engineers. This trend is expected to continue further, as internet integration into various electronic devices still remains a great opportunity. The ubiquity of electronic devices will usher a new phase in the tech industry.

The ball is in the court of the universities for now. If they manage to reform the course structure to meet the demands of an ever-changing industry, there will be enough prospects for CS and IT engineers.

While packages and fundamentals follow a similar trajectory, CS and IT have varying job growths across varying designations.

Growth variations between CS and IT positions in the tech industry

Quite surprisingly, IT openings show much more potential over time than CS jobs. This trend can be analyzed as follows.

While CS offers a more rounded approach to computer science, it lacks in providing industrial skills necessary to go higher in a particular position. In other words, CS isn’t as ‘marketable’.

The reasons are many. Unlike early years when the tech industry was in its infancy and people were judged based on their all round knowledge and versatility, thus preferring CS engineers. Companies have now become much more specific and clear in their requirements.

IT engineers, due to in depth knowledge in certain industry related areas, rise faster in tech companies who constantly need experienced engineers higher up the command chain. Many companies abroad have started to prefer IT professional over CS graduates who have scattered talents in many fields.

That is not to say CS graduates lack the skill set to succeed. Compared to other branches like EC, EE and Mechanical, CS is still a more lucrative option. However, because of lack of industry targeted courses, CS engineers are falling behind their IT counterparts.

The problem essentially is fundamental.

CS: Concern for the future

The future of CS is bright, but does it lack direction and vision?

Many people tend to ignore this major flaw. Using computer science (CS) courseas engineering major is not the right way to approach such a broad and vivid field. Consider other engineering disciplines such as ECE or Mechanical. Both fields have a clear agenda to treat every subject based upon a practical phenomenon which directly goes into use in industries.

Every engineering field is based upon a pure science. Mechanical has classical physics, civil has structural physics, chemical has chemistry and EC has electrodynamics.

Instead of trying to force specificity into CS by dropping portions, the focus should turn to perfecting the IT curriculum. For better all round education and competition, CS should be turned into a Bachelor of Science course. This will define its importance better and encourage only truly passionate students to pursue the subject, rather than a horde of students jumping on the bandwagon.

Upon analysis of course structure, salary and growth, it is apparent that IT is a more sustainable field with better growth. Does this mean complete alienation of CS?

Top engineering colleges in India are still setting CS cutoffs highest every year. As far as the near future goes, CS will be the most popular branch of engineering in India. However, every industry in every country has its own way eventually. If growth in IT sector maintains the same numbers it is currently at, one can expect a power shift from CS to IT after a few years. Until then, CS still seems to be the king.Computer science careers will continue to blossom.