Every year, lakhs of students take admission to institutions that label themselves as either private, public, or Deemed Universities.

These three types of Universities in India look the same on the outside. Like most higher education institutions, they have a standard campus, a range of courses on offer, and students from different walks of life studying there. On the outside, one would not be able to tell the difference between a private, public, or deemed university. It’s only after reading in a university brochure can one really ascertain which category to place an institution in. 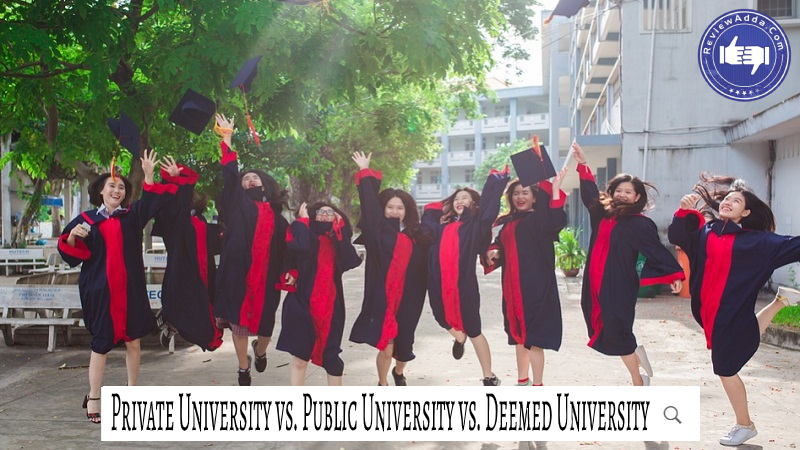 A lot of times, students are confused about choosing any one of the three types of universities. Choosing a college is a monumental decision. A mistake while choosing a university for Higher Education can have grave consequences.

In this article, we will list the differences between private, public, and deemed universities. We will also match up all three types of universities and see which one is better for the Purposes of Higher Education.

Some of the important points pertaining to a public university are –

As the name suggests, a university which is run by a private body and receives funds from private entities is called a private university. Institutions like Ahmedabad University and Parul University are examples of Private Universities.

Some of the salient points pertaining to private universities are-

Deemed or Deemed to be University refer to an institutions that have been conferred with the university status. Unlike private universities that have to work within the framework set up by the UGC, a deemed university has full autonomy over operational matters.

These matters include the courses offered at the university, the curriculum, admission procedure, and tuition fee. Private universities have to follow UGC regulations on matters like tuition fee and curriculum.

VIT, BITS Pilani, GITAM, and PEC are examples of deemed to be universities. Some important points regarding deemed universities are explained as follows –

The differences between public, private, and deemed universities are many. There are many areas in which they overlap. For instance, all the three Types of Universities have to be recognized by the UGC.

However, the lines of demarcation are clear when we speak of public, private, and deemed universities. The table below highlights some of the important differences –

Public vs Private vs Deemed University – Which is better?

After discussing all the little Differences between a Public, Private, and Deemed university, the simple question is which is the better choice.

This line of thinking is natural considering the ultimate reason behind knowing all this information is making the right decision. Once a student knows if a university is public, private, or deemed, a decision to join or not join the college remains to be taken.

So how does a student decide which college is better?

Are there Qualitative Differences between Public, Private, and Deemed Universities?

However, in the real world, qualitative differences do arise.

Public Universities like IITs and IIMs are the benchmark for higher education in India. In the beginning when there were not enough colleges and universities in India, all students could hope for was to get admission in top public institutions.

The most talented students in the country are in public universities because they have a very strict admissions process. The difficulty of cracking exams like NEET, JEE Advanced, and CAT or getting admission to a top college in DU is well-established. Due to such a tough onboarding process, the students who eventually make it to these institutions the top percentile of the country.

This is why it’s natural for students to prefer going to public universities. Since they are also more affordable compared to private and deemed universities, they are preffered more.

Private Universities are somewhat restricted to match public and deemed universities. This is because they have to adhere to UGC rules and regulations regarding matters like curriculum and tuition fee.  Since they are restricted to grow and reach for the level of public institutions, private universities end up falling a tier lower.

At the end of the day, a student has to look at the track record of the university in front of him and make a choice accordingly.

Where is it More Difficult to Get Admission?

Competition is an important factor while looking for a university to take admission in.

Since the quality and perception of public universities is foremost in India, there is a lot of competition to get admission these institutions. Every summer, we hear news stories about difficult it is to get admission to a good college in DU even after securing high scores like 95%.

The same story applies to the IITs and the IIMs. In the admission process to get into the IITs or IIMs, a lot of talented students are left out. These students then have to compromise for lower tier public university or a Top Deemed University.

Without any particular bias, it is safe to say that getting admission to the Top Public Universities is the most difficult. It is slightly easier to make it to a deemed university as many students don’t Apply for Admission to institutions in such a category. This happens for a variety of reasons, one of which is affordability. While an average middle class Indian family can afford to send a child to a public university like DU or IIT, it becomes more difficult when we consider universities like VIT or BITS Pilani.

While it’s tougher to get Admission to a Public University, it is naturally worth it. Getting admission to a public university means a student can get high quality education at a subsidized price and become part of a highly active alumni network. A simple analysis of the jobs market will show how much easier it is for a student from a top public university to get a job simply because of a robust alumni network and sustained university reputation.

The admission procedure at the top deemed universities is also very strict. B-schools like Symbiosis and NMIMS and tech institutions like BITS Pilani have a tough admission process which tests students on a range of different skills.

Making it to any good institution, whether its public, deemed or private requires a lot of hard work.

For someone looking for a college, it is important to know the key lines of difference between public, private, and Deemed Universities. This article offers an in-depth analysis of how each of these universities differs.

While there are some generalities which arise when we speak about these three types of universities generally, there are good and bad institutions that are public, private and deemed. It is up to the students to make a wise choice and judge a college based on its merit, not a tag in front of its name.