KL University vs GITAM vs Amrita vs SASTRA [Officially Comparison]

KL University vs GITAM vs Amrita vs SASTRA

Topic We Cover: KL University vs GITAM vs Amrita vs SASTRA

1. A Tale of Aspiration and Obsession: Engineering and South India
2. The Factors

Our university comparison ship changes course for this one, as we pit four Private Universities in South India against each other in a battle of attrition.

KL University, GITAM, Amrita and SASTRA represent some of the Best Private colleges in South India

Leaving dramatics aside, we’ll be comparing KL University, GITAM, Amrita and SASTRA through a cogent and measured analysis which takes into consideration every key factor a student does and should consider before taking the final plunge.

A Tale of Aspiration and Obsession: Engineering and South India

If there was any part of India which embodied the term ‘scientific temper’, it would have to be South India. Some of the greatest scientists our country has produced, from Nobel Laureate CV Raman to the missile man of India in APJ Abdul Kalam and Bharat Ratna awardee CRN Rao, each of these great luminaries came from the Southern belt of India.

This is not to suggest that other parts of India lack in any fundamental manner as far as scientific prowess is concerned, but rather a way of highlighting the contribution of South India to country’s repute in the international science community.

Going by pure numbers, a statistician on first reading would conclude either Andhra Pradesh has a population 5-6 times more than other state in the country, or students in AP have no other choice but to choose engineering.

While the first conclusion would be incorrect, the second one is subjectively true. Students in AP do have the choice of choosing commerce and humanities as their field of study, but the option is often ignored because of varying factors; primary ones being either peer or parental pressure.

No matter how you view the above data, such an inversion is proof of the presence of a corrosive obsession in AP. To know more, check this link out.

The comparison between KL University, GITAM, SASTRA and Amrita University will be done based upon the following factors. While some of them are highly popular amongst most aspirants, a few others aren’t discussed at the level they need to be. With this article, we will look to keep these factors on a level playing field and offer each university a fair chance to outdo the other.

The factors are listed below:

If digging a tunnel is the equivalent of doing engineering at a college or university, placements can be seen as the light at the end of the tunnel.

Any good college or university in India is expected to deliver for students through campus placements. While some institutions are able to entice companies simply by their brand such as IITs and IIMs, others work hard to develop strong industry relations and alumni networks to consolidate placements at their respective campus.

Similarly, the feedback from the industry also plays a vital role. Company feedback during placements is mostly dependent on the quality of students at the campus. Thus, students also need to be at the top of their game for a college to consistently deliver on the placements front.

Perception is a unique factor in its own right, as it is primarily quantified by the performance of the college in every other field.

Maintaining a good perception is a tumultuous task in its own right. Most private colleges and universities use state-of-the-art infrastructure and high placements to sway perception.

Infrastructure is one of the most misunderstood factors. Most students make the mistake of joining college simply by judging the aesthetic beauty of institutions. This is a trap most private universities in India set to lure students in.

For e.g. artificial intelligence is assumed by many to be the next big ‘thing’ in modern technology. Many even go so far as to consider it the future of engineering. To tap into this trend, assume a university ‘ABC’ introduces a semester long course in AI. However, it fails to open a lab to give students a chance to find and build upon existing concepts in AI. This is what we call a ‘gap in infrastructure’. Simply introducing an AI course is futile unless the university backs up its ambition by improving infrastructural capabilities.

Student-to-faculty ratio is quite easily the most underrated factor which stays under the radar during college comparisons. While most students tend to single-mindedly find placements statistics of every college they can get into, StF tends to sink beneath the surface.

The importance of StF is only visible when students actually enter the college. Colleges and universities with high student intake end up compromising on many resources to increase profits. One of these resources is unfortunately faculties, who in most cases are not enough to manage such a voluminous quantity of students

One of the oldest private universities in Andhra Pradesh, KL University is counted amongst the top educational institutions in the state and South India in general. Instituted in 1980, KL University was established by the Koneru Lakshmaiah Education Foundation Society and recognized as such by the UGC in 2009. 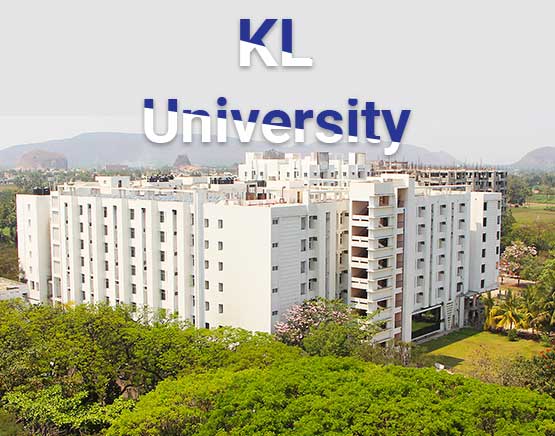 KL University has all the necessary accreditations for an institute in India to function. Accredited and approved by the AICTE and UGC respectively, KL University is further graded ‘A’ by NAAC. The 100 acre campus is also located near Vijayawada, which is a major factor to be taken into account.

B.Tech is the most popular course at the university, and admissions to the program are offered through performance national level exams such as in JEE Mains and JEE Advanced. Other state exams such as EAMCET are also considered. The university also conducts its very own entrance exam, the KL University Engineering Entrance Exam (KLUEEE) for B.Tech admissions.

KL University offers a number of courses across varying disciplines through constituent colleges under its wing. These colleges are listed below:

KL University course details are given below, covering the length of each course and its respective annual tuition fee.

KL University placements are generally considered to be decent in comparison to other lower tier private universities. The table below gives a brief highlight of its campus placement program

GITAM University is one of the most popular educational institutions in Andhra Pradesh and South India in general. Its location in Vizag makes it a reasonable choice amongst engineering aspirants in South India. 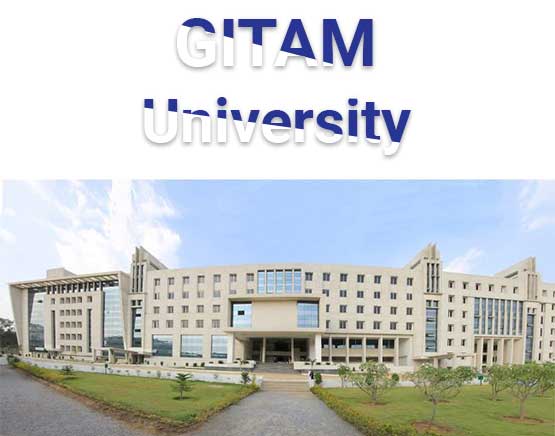 GITAM is amongst the most popular universities in South India

The Vizag campus of GITAM University was established in 1980, at a time when the Indian higher education sector needed a major push towards technical studies to bring the silicon revolution to India.

GITAM is approved by UGC and graded ‘A’ by NAAC. Besides the main campus in Vizag, GITAM also has campuses in Hyderabad and Bangalore. However, the new campuses still lack the appeal of the main GITAM Vizag campus.

In 2007, GITAM was conferred with ‘university’ status, thereby becoming the first private institution in Andhra Pradesh to be accorded this honour.

GITAM offers over 109 programs across various disciplines at its Vizag campus. These programs are offered through constituent institutes operational under the purview of GITAM. These constituent schools are listed below.

With over 109 programs offered at university, the details of some of the more popular GITAM courses are listed below:

GITAM has built a stellar reputation amongst aspirants on the back of impressive placement performances.

Amrita Vishwa Vidyapeetham is a relatively new educational institution compared to the other universities on the list. Established in 2003, Amrita was instituted at the time to meet the rising demand for technically educated engineers to usher the IT revolution in India. 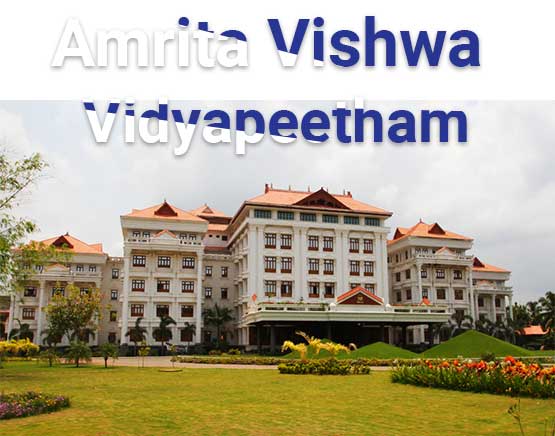 Amrita is one of the most renowned private universities in Tamil Nadu, located in Coimbatore

Amrita is a ‘deemed-to-be’ university accredited by AICTE and approved by UGC. It is also graded ‘A’ by NAAC legitimizing its status as a reliable option for higher education amongst students.

Engineering is the most popular course at Amrita and admissions to its B.Tech programs are offered on the basis of performance in Amrita Engineering Entrance Exam (AEEE).

Courses at Amrita are offered through the following constituent schools operational under the purview of the University. These schools are:

Going by statistics below, Amrita University placements are quite decent relative to some other lower tier colleges. The table below gives a brief summary of the placement stats:

SASTRA University is another old name amongst educational institutions located in South India. Established in 1984 as Shanmugha College of Engineering and affiliated at the time to Bharathidasan University, it became the first institute in Tamil Nadu to gain ‘deemed university’ status in 2001.

Spread across 46 acres in Thanjavur, a city which played a central part in Tamil history, SASTRA has kept pace with many other colleges and universities which were established at the same time such as VIT Vellore (1984) and SRM (1985). 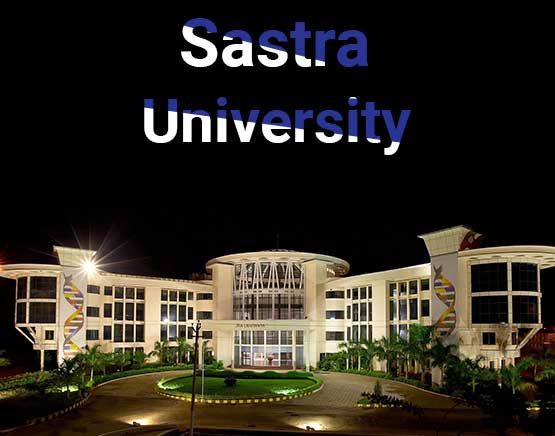 SASTRA is approved by UGC and graded ‘A’ by NAAC. Over 13,000 students are currently admitted at SASTRA which again shows the trust students have reposed in the institutions.

Like most modern colleges and universities, SASTRA has different departments for dispersing the different courses it offers. These departments are called ‘schools’ and are listed below:

SASTRA Course details are listed below, namely the duration and fee of each course offered.

SASTRA University placements data has been briefly surmised in the table below:

After finally discussing each college and university we set out to compare, it’s time to rate the college based on the aforementioned factors: